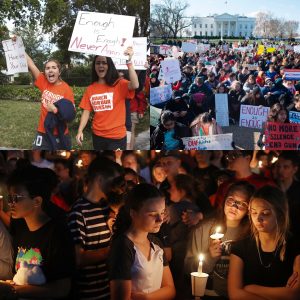 Last week several encounters reminded me of why I chose to spend my career teaching and learning with young adults. First, the articulate students arguing for meaningful curbs for violence moved the needle more than adults ever have. Their fierce determination to make the world safe for all students inspired me. Their courage and resilience kept them from backing down in the face of adversity. Their unwillingness to be silenced helped to bring about change.

And they reminded me of the students who had inspired me as I fought to help establish Gay/Straight Alliances in my district. They, too, refused to back down. Their articulate demands, their fortitude, and their mutual support inspired me. Because of them I did not back down. Because of them, the GSAs are still going 18 years later.

And I had three delightful encounters with former students. On Tuesday night one of them joined my writing group. She and I had reconnected before – in fact, I blogged about her in “What’s Behind the Mask?” She contributed to our rich discussion so effectively. When I smiled and said, “You must have had good English teachers,” she replied, “But, of course.” I’m delighted that she’s decided to join us. The next morning I finally had a much delayed coffee date with the former student I’d blogged about in “Relationships Are a Two-way Street.” The delays had been my fault, but the wait was worth it as I discovered this vibrant young woman as an adult with an interesting life and entertaining stories. I look forward to seeing her again, too. And the very next day I saw, as I so often do, yet another former student as I checked in a friend at the gym. This lovely young woman and I first connected there in a Zumba class, and she now works the front desk. Every time she’s there when I check in, her smile of encouragement inspires me to work out well.

I always hated the old joke that the three best reasons to teach are “June, July, and August.” I used to think my reaction stemmed from the work I did most summers: curriculum work, reading new materials, teaching teachers about problem-based learning.  And I resented the way it diminished the unreasonable pace of the school year which made some summer time recovery a necessity. I now realize, however, that my antipathy stems most of all from its diminishment of what really matters, the students. They provide the real payoff for teachers.

I became a teacher to impact students, and I hope I did. I expected to teach them, and I did. But the true gift of being a teacher comes from learning from students and the many ways they impacted me. Reminders of those lessons filled my life last week.  I feel incredibly lucky to have spent my professional life with students. 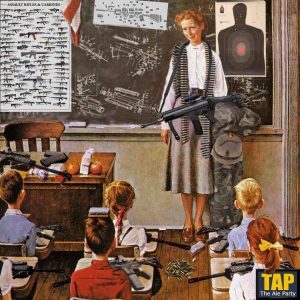 I’d intended to stay on the theme of technology and the challenges it poses, but the Parkland, Florida, school shooting and the remarkable response of the students there needs attention first. Not surprisingly, adults retreated to their partisan corners and the President flip-flopped once again. For the first time, though, I have hope. The activism of young people won’t let this go.

I am adamantly opposed to arming teachers. Not only would this change the atmosphere in the school and create additional danger – most of  my high school students could have disarmed me – but a locked-up handgun, even if retrieved quickly, is unlikely to prevent mass casualties from an assault rifle. In a December 2012 statement, the National Association of Secondary School Principals said, “Firearms in principals’ and teachers’ hands might do more harm than good. To be effective, schools must be perceived as safe havens.”[1] Teachers can only make schools a safe place to learn if they focus on teaching. They cannot be the police force. And at Parkland, the police officer, trained to protect people and carrying a gun on his person, failed to stop the shooter. Could we expect more from teachers? Should we? I say a resounding no.

So what can we do? The Washington Post argues that the perpetrators are “disappointed loners, motivated by grudges, seeking fame and planning their violence carefully.” To keep guns out of their hands, The Post offers several suggestions:

To that list I would add banning assault rifles and bump stocks. Why do we allow weapons of war in civilian life? These weapons did not exist when the Second Amendment was written. Their only purpose is to kill as many victims as possible in a short period of time. They have no place in our society.

These suggestions only offer a starting point. The Rand report on “Gun Policy in America” acknowledges that we need more research to identify best solutions, but it asserts that background checks do reduce firearm homicides and suicides, that gun prohibitions associated with mental illness reduce firearm violence, and that child-safety measures reduce unintentional injuries and deaths.[3]

On another front, I personally believe we need to elect Senators and Representatives who will not succumb to the financial power of the National Rifle Association. We have that opportunity this November.

And in a New York Times Op-Ed piece, David Brooks insists that, “If there’s one thing we’ve learned, it is that guns have become a cultural flash point in a nation that is unequal and divided. The people who defend gun rights believe that snobbish elites look down on their morals and want to destroy their culture. If we end up telling such people that they and their guns are despicable, they will just despise us back and dig in their heels.”[4] He writes about the group “Better Angels” that works to bridge the partisan divide on all issues and shows how they bring people with opposing views on gun violence together to really hear each other. And he offers our greatest hope for finding common ground and reasonable policies: “We have one big tribal conflict, and policy fights are just proxy battles as each side tries to establish moral superiority. But just as the tribal mentality has been turned on, it can be turned off. Then and only then can we go back to normal politics and take reasonable measures to keep our children safe.”

Just as the “Me, too” and “It’s About Time” movements are bringing about a cultural shift in norms and behaviors once thought impossible to achieve, we can cause that shift about gun violence. It’s about time that we protect our students and teachers and staff. It’s past time.

Every American who is concerned about gun violence in general and the mass shootings that have become our norm needs to speak up. Call or email your Senator and Representative. Check the positions of your candidates in November. Consider joining a “March for Our Lives” rally near you on March 24. We can keep the momentum going, and the momentum can lead to incremental changes. We can best honor the victims of mass shootings by supporting these activist students and becoming activists ourselves.