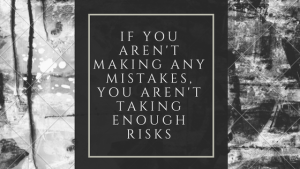 “If I ran a school, I’d give the average grade to the ones who gave me all the right answers, for being good parrots. I’d give the top grades to those who made a lot of mistakes and told me about them, and then told me what they learned from them.”

The whole system of secondary education – at least as I’ve known it – focuses on finding the right answer and rewarding that answer. The emphasis on the answer downplays the value and importance of the journey to find that answer.

I used to tell my students, “If you’re not making any mistakes, you’re not taking enough risks.” Amazing considering what a risk-averse student I’d been myself! But just as my best math teachers graded my work for process as well as product, we teachers need to promote process as what matters. To create lifelong learners who can seek and make meaning, we need to make room for “mistakes” and meandering along the way. We should reward good process at least as much as good results.

This value should apply to the English classroom. We have more wiggle room, for who can rightfully claim that they know the subtext of a dramatic speech, or that they can explicate a poem with complete clarity about the author’s intent? We can identify problems with style and syntax, but they may be purposeful and strategic.

Some answers are inherently ambiguous and allow for that kind of exploration. Was Hamlet a hero for avenging his father? What about his responsibility for all those deaths? Why didn’t Steinbeck give Curley’s wife a name in Of Mice and Men? Other issues seem to have more clear-cut answers. With Howard Roark in The Fountainhead, Ayn Rand makes a clear case for the need for individuals to stay true to themselves. An essay that promotes a different vision may be flawed, but the writer of that essay deserves an assessment of his/her argument, not just a knee-jerk response that the argument doesn’t hold up.

In the late 1980s my district had the privilege of using Writer’s Workbench, an early text analysis program that AT&T originally developed for its in-house writers. I loved its ability to quantify and analyze components of writing, turning over decision-making to the writers, giving them responsibility and ownership. Yet neither Faulkner’s novels nor The Declaration of Independence would have scored well on sentence variety or percentage of “to be” verbs, even though respect for those writings feels universal.

I required my student authors to print the analysis at both the draft and final stages. If some of the counts failed to pass the program’s thresholds, they simply needed to explain why their choices were justified. If we disagreed, that simply prompted more conversation, not punishment.

Albert Einstein offered a great corollary: “Anyone who has never made a mistake has never tried anything new.” I tried to encourage more fearlessness in my students. In my problem-solving class, the students who struggled most with the freedom – since there was never one “right answer” to the complex problems that they worked– tended to be Honors students used to the Pavlovian response of A’s for “right answers.”  Those who’d never fully bought into that system tended to thrive, transforming into articulate leaders.

Schools should foster courage, exploration, risk-taking, and innovation in their learners. Punishing mistakes fails to do that. Instead we need to show learners where they may have gone wrong and then give them another chance.

A week ago I had reason to revisit my passion for kayaking and its connection to the joy of teaching. Over fifty years ago I picked a life partner whose risk-taking nature and love of adventure contrasted my innate sense of caution and the residue of having been physically limited as a child by my pseudo-club foot. His slender body lacked the buoyancy and insulation needed to spend the hours in the water that I loved. My acrophobia and difficulty with high altitudes guaranteed that I wouldn’t climb mountains with him.

We found common ground in paddling, a skill he already possessed, starting with simple forays into rowing and canoeing. My competence and comfort level grew. By 1981 we had progressed to whitewater rafting all over the U.S. as well as canoe racing. We paddled a heavy green plastic monster in the Mid-American Canoe Race, then a 1000-canoe, 23-mile Illinois paddle from South Elgin to North Aurora, including five portages. Eventually we purchased a Kevlar racing canoe and trained for the event, coming in third in mixed doubles one year. My ebullience could not be contained!

After nine years of racing, I wearied of the isolation caused by the natural instability of the oddly-shaped racing canoe. In 1995 we chose single kayaks so we could paddle side by side. The Fox River runs through our home town, and we could be on the river in twelve minutes. Soon we were transporting our boats to other paddling sites, including a bird sanctuary near Sandwich, IL; the West Branch of the Des Plaines River; the sea caves in northern Wisconsin; and Lake Michigan. And we were traveling to paddle. Childhood fears and limitations faded as we paddled Ten Thousand Islands in Florida, Icy Bay and Prince William Sound in Alaska, the Outer Banks of North Carolina. Soon we were traveling abroad to kayak: Baja in Mexico, Belize, Italy’s Amalfi Coast, British Columbia’s Queen Charlotte Islands, Portugal’s Douro River, Cinque Terre and Sardinia, Lake Tanganyika in Tanzania, and Halong Bay in Vietnam. I had become a confident and skillful paddler, and that fearful child existed in me no longer.

What does this have to do with teaching? Leaving my comfort zone one baby step at a time made the challenges I chose to embrace less daunting. My husband Don’s support and encouragement propelled me through each successive new challenge. This incremental growth allowed me to see myself and my potential differently. And the joy of success at each stage thrust me toward the next. Isn’t that what a good teacher does? Good teachers create incremental learning opportunities, providing the support to ensure success. They help learners manage setbacks without feeling defeated; they share the joy of discoveries and the triumphs.

Eighteen months ago my dysfunctional knee made getting out of my kayak at the end of a paddle so challenging that I began to dread our outings. When a total knee replacement still didn’t provide enough flexion, I thought my paddling days were behind me. I signed up for a kayaking trip in the Lake District of Italy only after the guide and my husband assured me the tandem’s cockpit was big enough to allow an easier exit. And I worried about how I would train if I wasn’t taking my boat out much any more.

Another teacher came to my rescue. Rutabaga, the store in Madison, Wisconsin, where we purchased our original boats, hosts a major event every March. Canoecopia fills the city coliseum with vendors of everything connected to paddling and with nearly 200 sessions with speakers. Darren Bush, owner and “Chief Paddling Evangelist” has become a friend, so I emailed him about my predicament before the show. Unable to envision a kayak as light and beautiful as mine that could be workable, I held out little hope. Darren gave me his cell, said he’d meet me there, and – on that magical day – led me directly to the perfect craft. She’s every bit as sleek and stunning as mine, and nearly as lightweight, yet I popped in and out like a pro. Weeping with joy, I realized how important paddling had become to me, how unwilling I was to give it up.

I insisted on trying another boat – how could I make such a big financial investment without at least some comparison shopping? Darren took me to the next best choice. A functional boat, it didn’t make my heart sing. Before the weekend ended, we had bought the same boat for Don for its better back support and splurged on a hydraulic-assisted rack that drops the boats down on each side of the car. Now I can put my kayak on and take it off without a step stool. We also signed up for the annual Great River Rumble this summer. We’ll be paddling about 92 total miles, down the Root River and the Mississippi River, with 250 other people.

Darren’s ability to diagnose my needs and figure out how to meet them re-opened doors for me. That, too, is what good teachers do. And my joy and excitement about their being re-opened – isn’t that the biggest reward of teaching?

Twenty-seven months ago I finally took pen to paper – well,  fingertips to keyboard – and began writing the teaching memoir that had been lying in wait for years. Originally titled My Mother [crossed out] Professor Never Told Me There’d Be Days Like This, it would regale readers with the endlessly entertaining story of my career: a step-by-step replay, from my first childhood inklings that I wanted to teach.

My younger son always warns listeners: “Ellen Ljung, telling a story, making it long.” Determined to leave nothing out, I drafted my memoir in excruciating detail, step by step.

My amazing writers’ group, Night Writers at the Geneva Public Library, challenged me at every session:

“Who is your audience?” they’d ask.

“If this is for your family, a legacy for you grandchildren, fine,” they’d say.

“But if you want to draw people in, just tell your stories,” they’d advise me.

And they were right. So I began to list the stories I remembered, to draft each one for the next monthly session.

Stories emerged, some partially written before I even sat down at the keyboard. But they all had one important trait: the stories that mattered were stories in which I had learned. My students taught me, my colleagues taught me, and sometimes parents taught me.

John Cotton Dana wrote: “Who dares to teach must never cease to learn.”

I retired a very different teacher from the youngster entering her first classroom in 1970. This blog and my teaching memoir [to be published someday] offer my eternal gratitude to those from whom I learned.