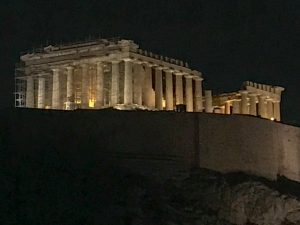 I’ve never been one for ruins. I’ve been blessed to visit them in Italy and the Middle East, and we had an excellent tour of Pompei, but – with the exception of the Coliseum in Rome – they’ve always felt cold and dead to me. I wasn’t even excited to be visiting Athens on the way to our kayaking trip in Sicily, a city filled with important ruins that I expected to find boring. I was wrong.

I fell in love with the Acropolis. Although I’d been able to imagine, at least vaguely, gladiators in the Coliseum in Rome, each part of the Acropolis told me a story. I could see the Greeks there, I could envision their worship, I could visualize the ruins as intact buildings filled with people.

As a teacher I had to ask myself why. What was so different this time?

Two factors made this experience memorable: context and story. Because we were so jetlagged on our midday arrival in Athens, we spent it at the Acropolis Museum. The displays are remarkable: overlays and drawings of what once was help fill in the gaps of what’s there now, and several videos tell the story of the making of the Acropolis and its role in Greek life. The museum itself is built over ruins that it highlights. When I was a student, most of my history classes had left me cold because I was taught a series of discrete facts to memorize, yet I was a Political Science minor in college because my poli sci profs told the stories behind the issues. Dates mattered but could be looked up. The how and why became the focus.

The Acropolis Museum provided enough how and why for me to appreciate the stories when we did get to tour the ruins. I could visualize the erection of the giant statue of Athena in the Parthenon even though it’s long gone. I could envision the laborers erecting the perfectly angled columns, manipulating heavy stones. Looking into the Theater of Dionysus, I could imagine ancient Greeks filling the rows to watch performances. I could see their world.

At night the illuminated buildings high on the hilltop filled our view, their harmony and symmetry commanding appreciation. Their aesthetic appeal called to me, but I would have appreciated the stories they told regardless.

This experience made me wonder: Did I do enough to provide context and story for my students? I just worked with a high school sophomore struggling with early American Literature. He found William Bradford’s Of Plymouth Plantation daunting. How could he recognize bias when he didn’t have a sufficient background, when his understanding of the relationship between the Pilgrims and native Americans was the stuff of movies and TV shows? We all need context and story.

I can think of at least two times I provided the kind of preparatory experience that the Acropolis Museum gave me. When my junior Honors students struggled with Beowulf, unable to relate to the relationship between thanes and their kings, my teaching partner and I wrote a guided imagery script. Students came into a classroom with the shades pulled down, lit only by candlelight, and they left out paper and pen as they closed their eyes. I took them to the land of Beowulf, reminding them that they owed allegiance to their king, that they must die for their king if needed. I told them they were enjoying a brief respite before returning to the battlefield, ready to die with honor. After they journaled about the experience, the discussions brought them to a new state of readiness for the literature they were going to read. And after my Advanced Placement students began reading Bread and Wine, the anti-fascist novel written by Ignazio Silone when he was exiled from Italy under Mussolini, a stellar history teacher came to tell them about Fascism and its history in World War II. Both of those experiences helped. I should have offered more of them.

Neuroscientists tell us we can only learn when we can connect what we’re learning with pre-existing knowledge. Teachers need to build those bridges when the material is so unfamiliar to their students. The Acropolis Museum built that bridge for me.