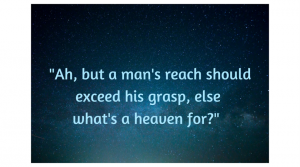 This quote by Robert Browning adorned the wall of my classroom for many years. Recently I posted that I’d started this blog on Facebook. I asked former students and colleagues to send me stories and memories they were willing to share. One of my students wrote about Browning’s quote: “I used that quotation just the other day, thought of you, and smiled. It’s not often you wax poetic while at work, but I think our client appreciated it…” Another responded, “I still quote this, too!”

Why does this quotation have such staying power? The expectations that others have of us so often shape our own. I wasn’t an indifferent student in public school, but the subjects that did not come naturally to me often took second place to my social life. Two teachers challenged that attitude – both of them became role models for me in my own teaching.

In seventh grade science Nat Sloan required us to borrow a book from his collection, read it, and report on it to the class. I chose Patterns of Culture by Ruth Benedict. This book shattered my naïve sense that the culture in which I lived was the norm. She studied three different societies and the unique cultural traits in each, arguing that “recognition of cultural relativity will create an appreciation for ‘the coexisting and equally valid patterns of life which mankind has created for itself from the raw materials of existence.'”[1]  Learning that the ID bracelets and letter jackets of our dating world held no more validity than rites from other cultures rocked my world. Reading such a demanding and empowering text taught me that I could do more, learn more. I didn’t learn until later that my own mother had studied under Ruth Benedict at Columbia. I did get to see Nat again at my 50th reunion, and he continues to inspire me.

Garnet Almes also demanded more of me, and she always got it. Stern and unrelenting, she expected our best in Algebra. She challenged my dependence on my natural talent for math, urging me to tackle harder work and to challenge myself. A force of nature, she, too, shaped my views about teaching. When she retired from my hometown’s public schools at 65, she moved to Virginia and taught several more years at a private school. Then she moved to Florida and met her husband, marrying late in life. We visited her there in the early 80s, and – along with Nat Sloan – she had been an honored guest at our wedding.

Goethe wrote, “Treat people as if they were what they ought to be and you help them become what they are capable of becoming.”  The banner in my classroom signaled my commitment to that philosophy. That students remember it and value it affirms its worth.

[1] from the new foreword by Louise Lamphere, past president of the American Anthrolopological Association